The Causes of Bruising in Older Adults

One of the most hated signs of “getting old” in elderly people is patches of bruising (purpura or ecchymoses) especially over the forearms, hands and legs. Most commonly these are due to a genetic predisposition of elderly people with thin, atrophic skin. Other contributing factors include anticoagulants (to prevent clot formation and emboli), platelet disorders, coagulation disorders, and vascular disorders. On rare occasions purpura is found with typhus, meningococcus, and bacterial septicemias. Thin, atrophic skin is very vulnerable to even the slightest of traumas that can create extensive bruising.

Purpura/ecchymoses is a wound created by blood separating the papillary dermis from the reticular dermis. This is a vulnerable area because the adhesive bonds between these two layers are weakened by aging and sun damage. Thus, minimal trauma can produce a cleavage of this space and a lake of blood that has few restraining forces to stop its spread with a tendency to expand spontaneously. Once this bruising occurs, the healing process takes 8-12 months to heal (as with all healing wounds). Of course, this takes longer in older individuals. Yet during this extensive healing period, minimal - or even no - trauma can create another bruise in the exact same place.

Commercial Products Have Been Developed to Cover Up Bruising

Repeated bruising in the same area of skin usually creates one or two types of pigmentation deposition: hemosiderin and melanin. The hemosiderin is the iron from red blood cells and the melanin is from the post-inflammatory hyperpigmentation of melanin cells. These pigment compounds can “stain” this area of skin for years as well as increase the weakness of this papillary-reticular dermal space making bruising even easier. It also produces these dark “permanent” blotches which people hate almost as much as the bruising itself. This is so embarrassing and common that many commercial cosmetic products have been developed with the sole purpose to COVER UP THE BRUISING!

It is time to have a product to help heal, protect and make the healed skin more resilient: Miracle Dressing Wound Care System (MDS). Miracle Dressing can stabilize vulnerable skin to prevent recurring bruising. MDS has two major mechanisms of action. First, the patent pending 21-day Miracle Dressing acts as a barrier, a “second skin,” stabilizing the skin to minimize bruising. It also minimizes further shear forces and friction that cause expansion of the existing bruising, thus limiting its ability to heal.

Using the Miracle Dressing, along with a humectant such as Natural Marine Extract in Aloe Vera Gel, allows the papillary dermis injury/wound to heal without disruption, stabilizes the entire wound and surrounding skin to minimize shear forces that easily expand the purpura/ecchymoses. Repeated use of the Miracle Dressing Wound Care System has been shown by biopsy to increase the collagen (strength), elastin (elasticity) and hyaluronic acid (thickness) of the skin. MDS also increases the number and function of the fibrocytes and capillaries that maintain, build and nourish the skin - changes are the foundation to making the skin more resilient to further bruising.

Because the 95 + year old patient fell 4 days prior to coming into the office, thus the skin tear could not be unfolded to spread over the wound. The wound and the surrounding skin were cleaned gently with soap and water. Agglutinant with Natural Marine Extract was placed over the entire wound and ecchymosis.

The 21-day breathable, stay-in-place dressing was then applied. A version of Miracle Dressing displaying a “DO NOT REMOVE” message was used to prevent wound care providers from unknowingly removing the dressing prematurely. The elderly patient maintained this wound by simply rinsing it in water with a sponge or in the shower.

The Miracle Dressing was removed with isopropyl alcohol. The vastly improved speed and quality of healing of this elderly patient with Miracle Dressing Wound Care System was evident not only in the wound but also in the surrounding ecchymotic skin. Normally, this extensive bruising would have left two types of pigmentation: hemosiderin from the iron in the blood, and melanin from the post-inflammatory hyperpigmentation. These pigments usually “stain” the skin for years. However, in this case there is no pigmentation and the skin’s condition mimics the skin quality of a 50- year-old.

95+ year-old patient fell four days prior to coming into the office with a skin tear and heavy bruising. 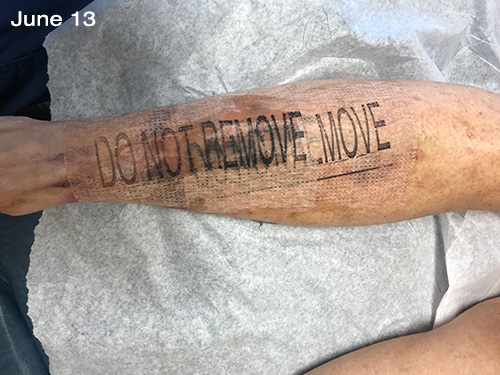 The 21-day breathable, stay-in-place Miracle Dressing System was then applied. 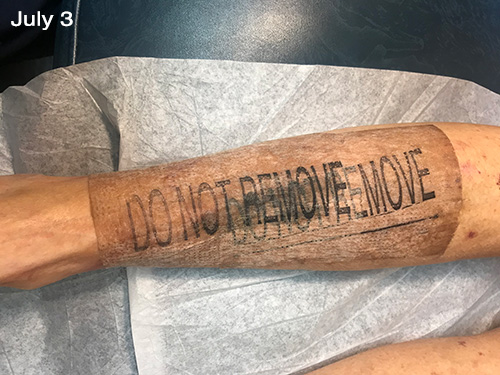 The Miracle Dressing was intact and still in place after 20 days. 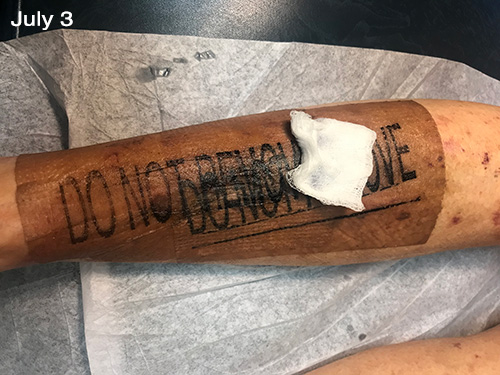 The Miracle Dressing was carefully removed with isopropyl alcohol. 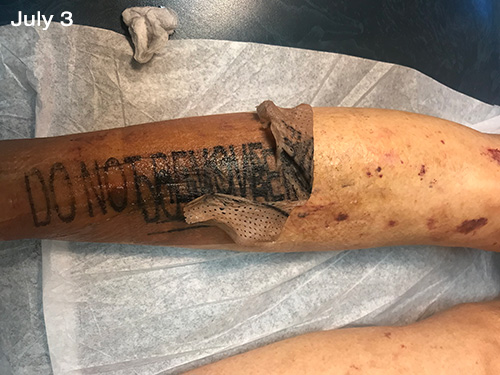 The Miracle Dressing in the process of being removed with isopropyl alcohol.

The vastly improved speed and quality of healing was evident in the skin’s condition.